After a lovely time in Porto Seguro (where I sort of wish I’d stayed longer) I hopped onto another overnight bus to make my way to Salvador, the capital of Bahia state. I’d read a bit about the city and was rather excited to be able to explore such a culturally and historically important place. What I didn’t expect was the city to be rundown to the point where safety is seriously compromised just by stepping outside. That was definitely a surprise, and not a great one at that.

I like nothing better than being out and about getting lost on purpose in new cities but that just wasn’t going to happen in Salvador. Despite its poor reputation, my decision to stay in Pelourinho (the historic centre) was a deliberate one. While the heavy police presence during the day gives it a certain degree of safety, after the sun goes down it’s every man for himself. I’m not exaggerating. Even during the day, taking the Lacerda Elevator and walking to the underwhelming Mercado Modelo was an adventure.

With that said, the three squares and adjoining narrow streets that compose Pelourinho are an absolute joy to explore. As are some of its churches, too bad hardly any of them are free to enter – to say this is unusual is an understatement. Bahia being the birthplace of Capoeira means the contagious rhythms of its music are always in the air. It’s not uncommon to find people practicing the martial art in the main square, which makes for a great opportunity to sit down on the steps with an acarajé (a popular street food) and just people watch.

Outside of the centre I went to check out the Barra district, by the sea. The lighthouse — its main highlight — was closed for renovations so I didn’t get to climb the tower, but walking along the beach was fun enough and made the trip worth it. My last stop was the famous Bonfim Church, popular for the colourful ribbons. Anyone growing up in Portugal in the ’90s will have had at least one of these, they were that popular. Ribbons aside, I was surprised by how beautiful the church was. Especially its hand-painted wooden ceiling! An absolute marvel to look at.

A few days later I headed to my next stop, Aracaju. I was now in Sergipe, the smallest state in Brazil. While the city may not feature in many tourist itineraries, I had good reason to visit: my friend Vitor! I was looking forward to spending some time with him and knew he wouldn’t let me leave without seeing everything Aracaju had to offer. As expected, I had a great time. On top of visiting the Arcos da Atalaia – the city’s most recognisable landmark – Vitor dutifully showed me the centre, some museums, and even a couple of excellent sunset spots.

The real highlight, however, were two small nearby towns dating back to colonial times. The first, called São Cristóvão, honestly felt like stepping back in time. Its UNESCO-listed status gives an idea of how important it is. We spent an afternoon walking around and exploring this quaint town founded by the Portuguese in 1590. It’s the fourth oldest city in Brazil! We also visited Laranjeiras, which is not as developed (or exciting) as São Cristóvão but still a fun place to explore.

Gutted about leaving Aracaju and Vitor behind, I headed to São Paulo where I looked forward to seeing another friend, Lucas. Since I had visited the city in 2016 and not been particularly enamoured by it the plan was merely to take it easy. All about the hangouts, you could say. So much so I only ever made it to the centre once and that was to see Daniel, another friend. The two highlights of my stay – both organised by Lucas – were going to see Santos play and a hike to Pico do Jaraguá, São Paulo’s highest peak. They were great fun.

Originally, I had planned to spend my 40th birthday in Florida riding roller coasters, but due to an unexpected hurdle (my visa waiver application was rejected because of past trips to North Korea and Iran, sigh) I had to take a loss on some of the confirmed bookings and make alternative plans. After a few extra days in the company of Lucas I headed to Paraty, a gorgeous colonial town dating back to 1597. It’s only an easy bus ride away (and by easy I mean only about 6 hours) and I was excited to visit a new place, as always. Sadly the weather was not great as it rained most of the days I was there, but I didn’t let that deter me from exploring the town.

What did deter me was the price of the food, Paraty is a very popular place among Brazilians and tourists alike and the prices clearly reflect that. Oh, and don’t get me started on the “cobblestones” used to pave the roads in the old town. They’re huge and really hard to walk on, to the point of annoyance. That said, I had a fantastic time exploring Paraty’s charming colonial architecture and even got to witness a crazy phenomenon. During the full moon the high tide floods parts of the old town, which was planned in order to accommodate the influx of water in a brilliant bit of engineering!

In a bid to somehow salvage what was a relatively less exciting birthday celebration than I had envisioned, for my last stop in Brazil I picked Rio where – after this unexpected change of plans – I’d now be flying back to Lisbon from. However, this time around I didn’t book a hostel. For the couple of nights I spent there I booked a hotel in Copacabana (YOLO, am I right?) with the most magnificent view over the famous Calçadão and the Atlantic. I wasn’t planning to go out much and took the chance to do some work while enjoying the views from the desk until it was time to return home. 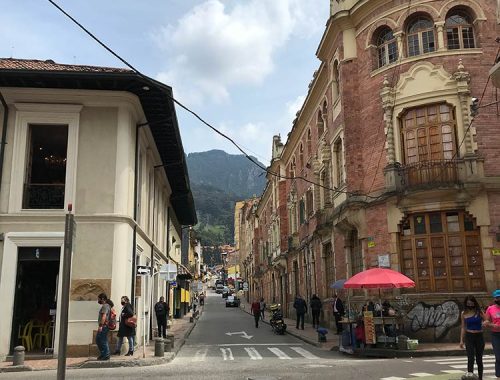 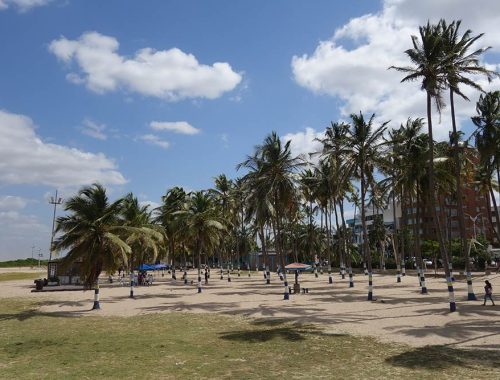