As Jack Torrance once famously wrote: “All work and no play makes Jack a dull boy.” So when Birgit – a lovely Austrian girl I’d met in the hostel in Santa Marta – mentioned she was going to Cerro Kennedy and asked me if I’d like to tag along I found it very hard to resist the invitation. What can I say? I’m a sucker for mountains (that much you already knew, I’m sure) and Cerro Kennedy was very high on my list of things to do in Colombia before I left the country!

The cerro (Spanish for hill) is accessed from Minca, a beautiful part of Sierra Nevada located about an hour or so by bus from Santa Marta and one of the most popular places to visit from the city. It offers a stark contrast to (and some respite from) the relentless heat that is so characteristic of the Caribe coast where daytime temperatures often go up to nearly 40 degrees Celsius. It is hot. 🥵

Climbing the cerro is a pretty straightforward 2-day affair – one to go up, another to come down – so we didn’t need much preparation apart from ensuring we had snacks for the way and some food to cook at the lodge the night before we hit the summit. We took a shared minivan from the busy market street in Santa Marta that drove us all the way to La “Y” (pronounced “La Ye”) – a location in Minca that got its name from the fact that there is an intersection in what is an otherwise boring stretch of uphill road.

After some issues with online booking due to it being high season, Birgit got hold of a nice place to stay called Casa Café and made a reservation via WhatsApp. We arrived there just in time for sunset and were welcomed with a glass of delicious homemade lemonade. We were now at around 1,200 metres and the fact we could be gazing at the sun setting over the Caribbean Sea from such a privileged viewpoint was nothing short of mind-blowing.

We had a filling dinner with a great view over the hills, speckled with little dots of light under a starry sky, and called it a night pretty early. Even though the next day was not going to be that demanding, there was some uncertainty about it all. Online information about the hike is scarce so even though we had a good idea of what to expect we would’t really know until we hit the trail. Gotta keep it fun somehow, am I right?

The few websites that did talk about it recommend starting from Minca Town (if you can call it a town) and walking all the way up. Basically an 8-hour trek, best case scenario. Of which, half of it will be spent walking uphill on a traffic road that doesn’t have great views. We decided to start from La “Y” instead – where Casa Café was located – as that seemed to be the place where the actual trail started. There are at least three buses driving past there daily so there’s really no reason to start from Minca. I’m as purist as they come when it comes to hikes so trust me on this one!

We left after breakfast and headed up the hill mostly surrounded by fog. Thick fog. Visibility was largely OK on the trail but the views were pretty much non-existent. We’d heard you can only see the views early in the morning and late in the afternoon so we were not too worried, we’d check them out the next day on the way down. The path is neither hard nor exciting. Just a very long uphill walk on mostly rocky terrain. We spent most of the time talking or just contemplating being surrounded by nature. There is a military base at the top of Cerro Kennedy so the whole path is wide enough to be driven by car (well, 4×4!) to the top. Getting lost is simply not an option!

We reached Moncho’s lodge in about 4 hours and were pleased with our time. The lodge is really more like a shack with a view where you can spend the night. We went for the cheaper option (which wasn’t cheap at all) – the dorms – and were just happy that the blankets seemed thick enough to keep us warm. The altitude at Moncho’s seemed to be around 2,700 metres, which means once the sun is gone for the day it tends to get a little nippy! No bueno. In our case, not too long after sunset it started raining. Not just a normal rain, mind you. It was pissing down tropical style. Thankfully it stopped after a while and we could only hope it wouldn’t come back before the next morning.

The kitchen was… well, not great, but Birgit managed to cook a meal consisting of pasta with tomato sauce and tinned carrots & peas – the food we’d brought with us. It wasn’t the best we’d ever had (quite the opposite, actually) but we needed the calories and the body sure doesn’t discriminate. We went to bed very early, after a chat by the fire with a few other hikers that were also staying there. The alarm was set for 4:15 a.m. It was going to be a rough night, always is when you need to wake up at stupid o’clock.

Thankfully it wasn’t very cold and we slept wrapped in what looked (and felt) more like rugs than blankets but… since we hadn’t had a chance to sleep much anyway it didn’t make a big difference. We started hiking at 4:30 a.m. in pitch-black darkness guided by our headlamps. The trail was not much different from the day before except for a few steeper sections, the relentless wind and the dense fog. Not to mention the odd puddle! It was eerie. We made it to the top in about an hour and found ourselves very much enshrouded in mist. You could hardly see a thing up there!

As we made it to the sign marking the top of the hill at 3,200 metres, four military men guarding the base approached us and told us we couldn’t go any further. People do this hike to see the picos Colón and Bolívar – the two highest peaks in Colombia, standing at about 5,700 metres each – and we were no exception. Problem was we didn’t really know where they were. We had expected to make it to the top of the hill and from there just spot them easily but now we were a little lost. So we decided to make it down in the hopes of finding a place where the visibility was a little better.

Turned out to be a great decision! As the sun started to slowly illuminate the sky we got see some fantastic views of the hills and its valleys (filled with a beautiful cloud inversion!) on the way back to Moncho’s. The views of the two picos nevados were nothing short of glorious and we stopped for a while to truly enjoy the moment – that was the reason we’d woken up this early after all! We walked back to Moncho’s afterwards to eat breakfast and check out another (equally impressive, it would turn out) viewpoint right next to the lodge before going back down.

The walk down was fun all the way to La “Y” because the views were now clear and we got to enjoy them as we made our way down, with the odd stop here and there. But after that we very much had to walk along that same road I said is best avoided on the way up. It’s not particularly exciting, it can get busy with traffic, and – if you followed my Fisherman’s Trail trek – you already know how much I like hikes that involve walking on tarmac. Since the return bus schedule is a little harder to predict we already knew we were going to have to walk, but still.

Getting to the hostel we’d booked – Casas Viejas, the one above with the infinity pool and gorgeous view of the sierra! – was a bit of an adventure, but a worthy one. By the time we got there we were beyond exhausted, having walked over 25 kilometres that day. The hostel turned out to be exactly what we needed and, satisfied with how the whole adventure had turned out, we looked forward to mainly two things: showering and getting in the pool – which we did almost immediately. With a view like that it would be rude not to! The next adventure would certainly have to wait. 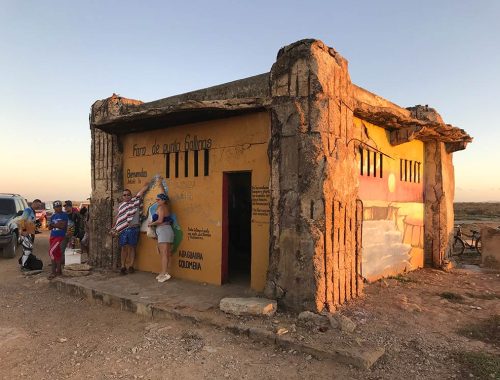 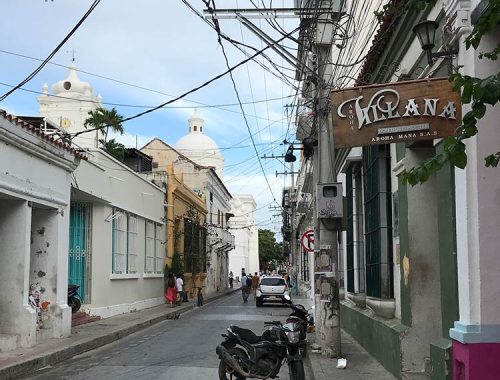